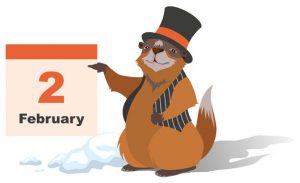 Happy Groundhog Day!   Well, it’s here again. Just ask Bill Murray!! Will Punxsutawney Phil, The Prognosticator of Prognosticators, once again appear at sunrise at Gobbler’s Knob in the beautiful wilds of Punxsutawney, Pennsylvania to make his seasonal weather prediction? You can bet your furry snaggle toothed rodent, he will. Phil’s got great genes…this will be his 131st Groundhog Day! To the novice of this sacred day, if he sees his shadow there will be six more weeks of winter. No shadow….spring is right around the corner. Since 1887, Phil has seen his shadow 102 times, and not seen it 18 times(there is no record for 10 times in the late 19th century). Don’t be fooled by the copycats….West Virginia’s French Creek Freddie, Georgia’s General Beauregard, Ohio’s Buckeye Chuck, North Carolina’s Sir Walter Wally, Louisiana’s Cajun Groundhog, Alabama’s Smith Lake Jake, Wisconsin’s Jimmy, and New York’s Staten Island’s Chuck( full name-Charles G. Hogg), to name a few. Moore than 20,000 loyal followers will be in attendance and millions more will be watching on television to see the “Man of the Hour”, Punxsutawney Phil !!

Well, he’s done it to us again….six more weeks of winter!! I guess there are some people happy with Phil today….skiers, snowmobilers, ice fishermen to name a few. I think most of us would rather get our golf clubs out instead of our snow shovels. However, I might be able to hit a golf ball better with a snow shovel!  The forecast for Western Pennsylvania today is a high temperature of 23 with the low tonight of 13. Grab an extra blanket!